Since 2016, the number of filed cases concerning the accessibility of websites and/or apps with a presence in the United States has been growing steadily.

The reason for this is the discrimination faced by people with disabilities when they cannot access or perform specific actions on a website and/or app.

UsableNet investigated the subject with key figures for 2019. Let’s look at them together.

“Web accessibility means that websites (…) are designed (…) so that people with disabilities can use them. More specifically, people can perceive, understand, navigate, interact, and contribute to the Web.”

The legal context in the United States

These legal and financial proceedings are filed under the ADA (Americans with Disabilities Act) and mostly based on the notion of discrimination. U.S. law does not distinguish between the public and private sector, or between a brick-and-mortar shop and an online store. Whenever a service does not allow a person with a disability to perform a particular action or access information, then it constitutes discrimination. It is this discrimination that can be challenged under the law.

An increase in case filings 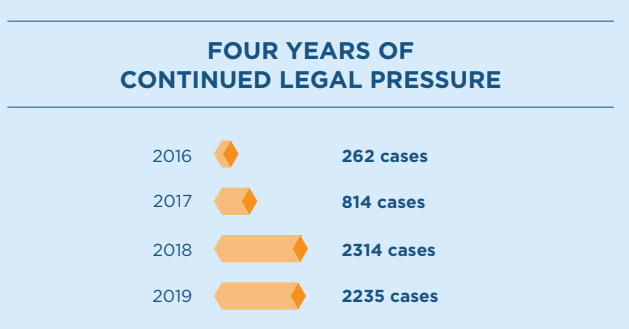 We are seeing an increase in the number of case filings, as well as constant legal pressure :

The slight decrease between 2018 and 2019 is the result of the Domino’s Pizza case, which made a lot of noise in the accessibility community.

In case you missed this story, a U.S. citizen named Guillermo Robles was unable to access Domino’s website and place an order because the site was not compatible with the assistive technology he was using. Robles relied on a screen reader and the site should have followed a number of best practices to ensure the best possible user experience. This was not the case and this user was therefore discriminated against. As a result, he took legal action against Domino’s.

This is where it gets interesting. In most cases, when a website receives this kind of complaint, the company apologizes to the user for their oversight, keeps a low profile and finally implements an action plan to bring the website into compliance with international accessibility guidelines (WCAG). The point is to avoid discriminating against another user. But Domino’s did not choose this path. Instead, they chose to challenge the fact that the ADA could be applied to the Web. They took their case to the Supreme Court (the highest court in the United States), which cast a chill over the accessibility community, with most concerned that a legal precedent would be set to the detriment of users. Domino’s eventually lost their case and like everyone else, they will have to ensure that they do not discriminate against anyone on their apps and websites.

They lost the case and then petitioned the Supreme Court, which declined to hear the case, thus upholding the appeal decision. For the time being, the Supreme Court therefore leaves it to the judges in the lower courts to rule on a case-by-case basis. 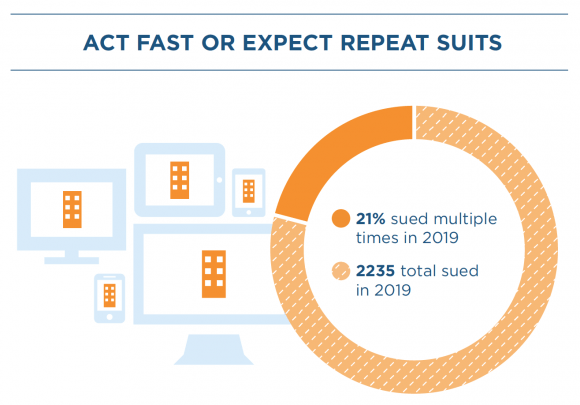 Another aspect illustrated by the report and that we tend to forget is that a lawsuit can be followed by more lawsuits. A website is not “off the hook” once a case has been filed. On the contrary, it is very likely to be sued again by other law firms. Out of 2235 companies sued in 2019, 21 % received multiple lawsuits.

So the rule is to act quickly and deliver results. For instance, start by focusing on all your sticking points and on the essence of your service. If you run an e-commerce store, your first priority should be to work on the purchase tunnel and not on the FAQ pages.

The most targeted industries 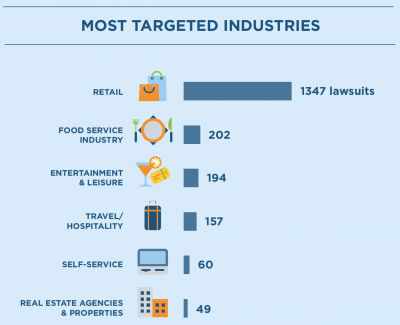 Unsurprisingly, the e-commerce industry is the most affected, which makes sense since people with disabilities are more likely to order a service or product online rather than having to go to a physical store. Second place is the food industry (hi there, Domino’s), followed by the entertainment and leisure industry, and then the travel and hospitality industry.

It is also worth noting that more than 66 % of the top 500 e-commerce companies have already received at least one accessibility-related lawsuit.

Financial and legal considerations aside, in 2020 is it reasonable to knowingly exclude an entire segment of the population because of a lack of knowledge or interest in web accessibility ?

Sign up for our newsletter and get our company's latest news and events delivered straight to your inbox !

MACH : the future of software architectures ?

Symfony and Laravel, the same language : what are the key differences ?